Why you should throw your pressure cooker away

My wonderful mother in law just recently got a screaming deal on a Ninja Foodi! She said she would never use it so she gifted it to me. I had actually never heard of it before and didn't know what it was.

For those who are like me and have no idea what this thing is let me tell you! It is a: 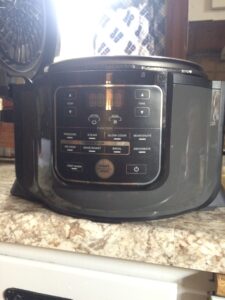 I love my pressure cooker so I was really wondering if I needed another appliance on my counter or hiding in a cabinet. This thing is really big as well! It also has 2 lids one for the pressure cooker part. The second lid is attached to the actually bottom unit, which is for the air fryer, convection oven, and dehydrater part.

I really was mulling over what I should try first in it. The Ninja advertises you can do multiple things at once it even without a recipe. I figured that would be where I should start. There were too many rcipes in the book that I wanted to try I didn't know where to start.

My mother in law also bought me a cook book that had this great guide that you just use what you have.

The functions I used were the pressure cooker and convection oven (crisper) features. 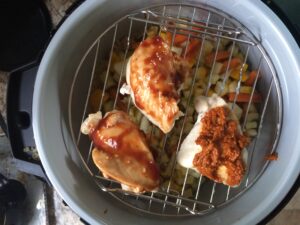 I should not have done carrots and summer squash. The carrots were not done. I think if I would have put in the carrots with the quinoa and carrots they would have been fine.

The chicken did have a nice crisp to them which was nice touch. The quinoa was perfect and didn't over flow on to my stove which usually happens when I cook rice and quinoa.

Did I mention I only used one pot for this whole meal!

So far I am getting rid of my pressure cooker for sure. It is not an insta pot its the Aldi version which works totally fine but so far I do like the other features on this one.

I am actually excited to try the dehydrating feature as well as the air fryer. I have some potatoes ready for tomorrow to make fries.

Have you heard of the Ninja Foodi? Do you want to see more recipes I make with it?